How did Karl Lagerfeld maintain his never-ending Creativity? 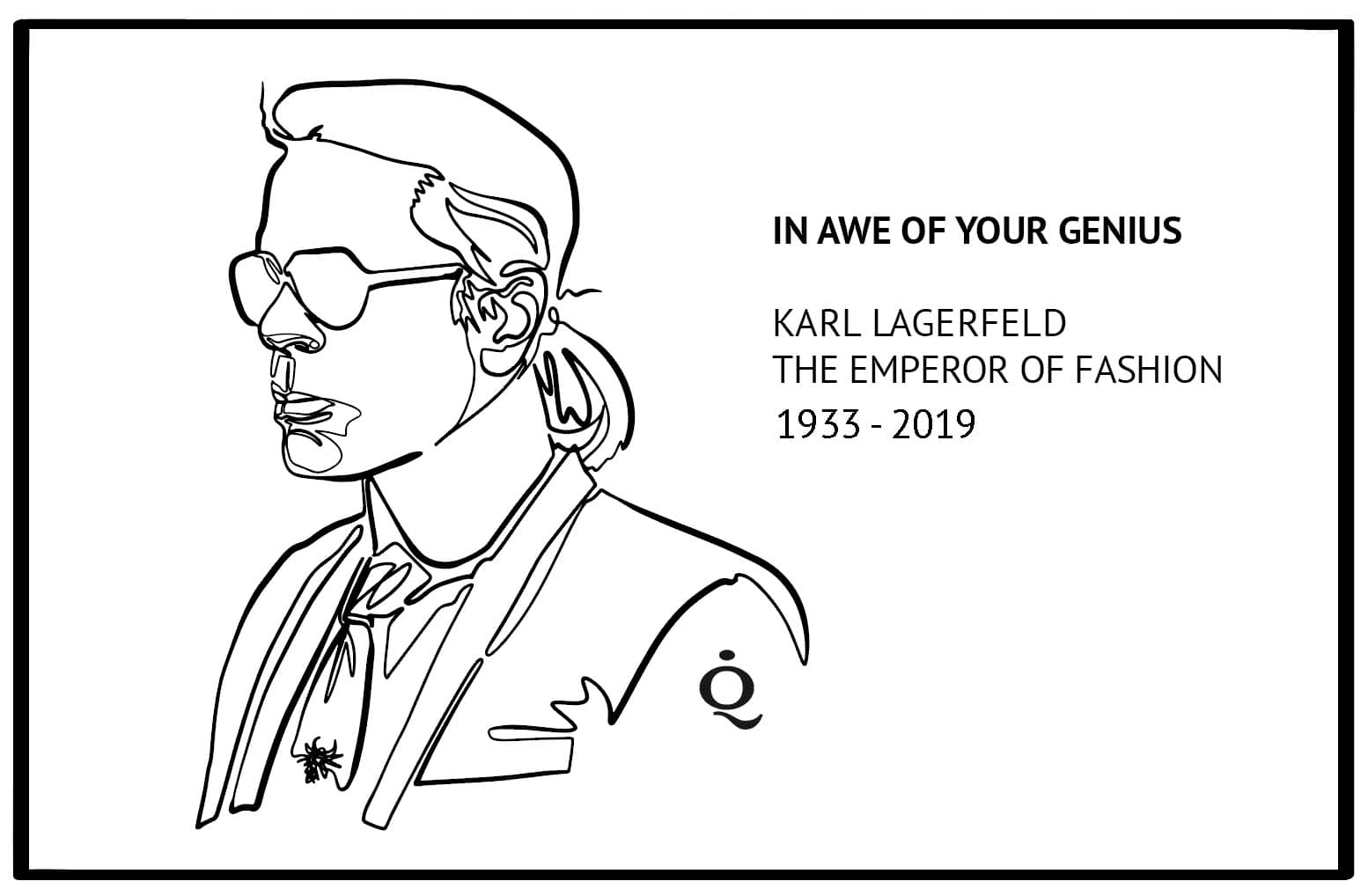 Last week Karl Lagerfeld, my idol died in Paris at the age of 85. The most prolific fashion designer of the 20th and 21st centuries designed about 16 collections per year for Chanel, Fendi and his own eponymous line, KARL. Monsieur Lagerfeld’s power station ran on high voltage 365 days a year. While colleagues lapsed into irrelevance or gotten involved in drugs and scandals, Lagerfeld dominated an industry that sucks up creative artists like a black hole. So the big question is: How did this idea-generating plant keep his creative performance on high voltage 365 days per year?

One explanation of his majesty’s resourcefulness can be found in individual traits such as insatiable curiosity, willpower, creative confidence, Prussian discipline, and an attitude scarce amongst people over 30: F-L-E-X-I-B-I-L-I-T-Y. Lagerfeld abstained from being classified, “I’m from no generation, I’m part of no group, I’m totally floating and this is the whole story and why I can survive.”, he once said. This descendant of a considerably rich German family also abstained from drugs. When being asked if he has ever experimented with drugs at all, he replied, “Never. I saw others doing it and I didn’t think it was such a success.”

The Emperor of fashion had perfect circumstances

Another explanation for the style czar’s productivity can be found in perfect circumstances. According to Lagerfeld, he was not obliged to participate in budget meetings. Neither did he have to crawl through rugby games (meetings) and fight — inch by inch — for his designs. Arguing over creative ideas or taste can take away huge amounts of energy. King Karl decided what he believed to be right. Above the door to his office was a plaque adorned with the crystal-clear maxim, “Creativity is not democratic.” Plus, the baroquesque king with the powdered white ponytail operated a royal court with hundreds of dedicated and highly talented helpers, converting his designs into wardrobes and anticipating his every wish.

Another key to the productivity of the nonstop forward-thinking designer is to refrain from wasting time on doing taxes or booking flight tickets. The commercial artist purely concentrated on his number one prowess: drawing. He once said: “I love to be creative all the time … If not I would be bored and boredom is a crime.”

But again, how did the fashion designer maintain his breathtaking creative performance? After all, he was not Superman! Or was he?! Two notions would back this theory: first, both were born in the same year, in 1933. Second, Karl Lagerfeld was constantly flying high in the fashion sky.

But seriously, what magic fuel was the 85-year-old running on?

Let’s have a look inside the reactor of the plant and examine Lagerfeld’s eating habits. According to an interview Karl gave for Harper´s Bazaar (March 2012), here is what he had for breakfast, “I have two protein shakes made for me by my doctor—they have a chocolate taste and no sugar, of course—and steamed apples. That’s all. I don’t like anything else in the morning.” He normally skipped lunch and, according to the documentary Lagerfeld Confidential (2007), he had fish and vegetables for dinner.

Hmm. No yummy Pain au Chocolat? Not even whole-grain cereals? Only steamed apples and protein shakes for Karl? Pas possible! Let’s ask an expert. Baba Shiv, an expert in the area of neuroeconomics has found that the best way to maximize creativity is to maintain high levels of both serotonin and dopamine, which will keep a person calm but energized. The professor at Stanford Graduate School of Business, continues, “High-protein breakfast is easily converted into serotonin and dopamine.” Très interesting!

How do dopamine and serotonin affect the creative mind? Dopamine is responsible for ‘wanting’, like pursuing the new, increasing attention, broadening the horizon, and taking risks. Dopamine promotes the development of new connections between neurons. However, the uncertainty of the unknown combined with time constraints creates not just excitement but also tension! High uncertainty levels and time pressure increase stress, therefore we are less likely to pursue new territories. Instead, we seek comfort and security. To stay in a creative mood, the brain, therefore, needs serotonin, a calming hormone that balances excitement and reduces anxiety. Serotonin provides a feeling of comfort and safety, reduces cortisol levels, and gives self-confidence. 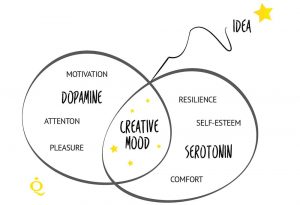 Now the question arises: From which building blocks does the body produce Dopamine and Serotonin?

Building blocks for Dopamine and Serotonin

Serotonin is produced from the essential amino acid Tryptophan. Essential means, it cannot be synthesized by humans, it has to be ingested. Dopamine is synthesized from the non-essential amino acid Tyrosine. The precursor for Tyrosine is the essential amino acid Phenylalanine. By taking two customized protein shakes in the morning, Lagerfeld seemed to know what he was doing. Additionally, the hunger artist who lost 80 pounds in 13 months, and his doctor, Dr. Jean-Claude Houdret, recommend in their book The Karl Lagerfeld Diet (2005) to take vitamin and mineral supplements. B-Vitamins for instance, such as B1, B3, B5, and B6 are intimately involved in Dopamine and Serotonin synthesis; so is iron. Magnesium and Zinc help to potentiate the activities of the two neurotransmitters.

Let’s elaborate a bit on Monsieur Lagerfeld’s drinking habits. According to the couturier himself, he drank about 10 cans of diet coke – per day! Lagerfeld stated, “I can even drink it [diet coke] in the middle of the night, and I can sleep. I don’t drink coffee, I don’t drink tea, I drink nothing else.” Why diet coke? Was this just another quirk of the über-eccentric, who only wore gloves without fingertips, or did he need the caffeine to keep his ingenious mastermind working 17/7? Lagerfeld slept exactly seven hours a night. Let’s do the math: One can of coke contains 42 mg caffeine. If Lagerfeld drinks about 10 cans of diet coke a day, that amounts to 420 mg caffeine, which corresponds to about seven and a half cups of espresso per day. (One espresso holds an average of 55 mg caffeine.) That’s a lot more than the average, but not unusual.

Is coffee a creativity stimulant?

Could caffeine be the secret behind the creative engine? According to Maria Konnikova, author of the book Mastermind: How to Think Like Sherlock Holmes (2013) “caffeine prevents our focus from becoming too diffuse; it instead hones our attention in a hyper-vigilant fashion.” Konnikova thinks that while caffeine has numerous benefits, it appears that the drug may undermine creativity more than it stimulates it. Caffeine sharpens our mind but isn’t helpful for opening it up to creative thinking.

If it’s not the caffeine that drives the creativity of the multi-talented artist, who featured in the Andy Warhol movie L’Amour (1973), why else did Lagerfeld swore by Diet Coke? And why did it have to be diet? Let’s have a closer look into what Diet Coke is made of.

Are there secret powerful ingredients in Diet Coke?

Diet Coke contains another central nervous system stimulant. An artificial sweetener called Aspartame, also known as Nutrasweet, Canderel or just E951. Aspartame doesn’t have the best reputation. Every person I have asked so far perceives it as bad or poisonous. Nevertheless, in 2007 a team of international scientists came to the conclusion that there is no evidence of disease-causing effects. Not even in amounts many times greater than the levels ingested by consumers with the highest consumption.

Let’s analyze the components of Aspartame to get a better understanding of what it is made of. Who knows, maybe afterward you may feel inclined to reframe your thoughts about the artificial sweetener?

Aspartame is the methyl ester from the two natural amino acids L-Phenylalanine and L-Aspartic Acid. Upon digestion, it breaks down into Aspartic Acid, Phenylalanine, and Methanol. None of these amino acids itself is sweet, but if you esterify a dipeptide of Aspartic Acid and Phenylalanine with Methanol, you get a sweet taste. The metabolite Methanol is seen as the bad guy in Aspartame. But the amounts of Methanol per can are less than the amount found in one glass of orange juice or in one banana.

Would you think of a banana as poisonous?

Maybe the sugar industry realized that profits could go down the drain due to the new competitor, “artificial sweetener,” which was first introduced in 1965?

Maybe the sugar industry commissioned studies on rats using extremely high doses of Aspartame to find negative effects? After all, it is a multi-billion dollar business. The sugar daddies want to keep their cake and eat it alone.

Anyhow, my point is not to put forward the case for the use or nonuse of Aspartame; my point is a different one…

My point is that certain amino acids facilitate creative thinking! How? One can of Diet Coke contains 90 mg of phenylalanine. If Lagerfeld sipped ten cans per day, it adds up to 900 mg of phenylalanine. To put this in perspective, the recommended daily intake is 33 mg per kilo of body weight. Karl Lagerfeld weighed about 65 kg (jeans size: 30) which means his recommended daily intake amounts to 2,145 mg. By drinking 10 cans of Diet Coke, Lagerfeld added another 900 mg of Phenylalanine, a whopping surplus to produce dopamine by 42 percent! As Dopamine initiates exploration it could very well explain the everlasting curiosity of the artist who read 20 newspapers in four languages, overlooked a library of 300,000 books, and listened to music from more than 100 iPods. By the way, this fashion engine never got be stopped by Parkinson’s disease, because this malady is characterized by low levels of Dopamine. But, Lagerfeld was prone to another illness, “I have a sort of Alzheimer’s for my own work, which I think is a very good thing. Today too many people remember what they did – just forget it all start again.”

The second amino acid in Aspartame, Aspartic Acid, enhances neuronal function and memory. Aspartic acid, when turned into D-aspartic acid, works as a testosterone booster. Testosterone increases positive mood, vigor, and energy. By taking ten cans of Diet Coke, Karl Lagerfeld seemed to provide his creative muscles with the right fluid to perform at their best.

There is just one tiny little detail to worry about: tooth decay! According to researchers at the University of Melbourne, diet soda contains acids that destroy enamel and wear down tissues in your teeth.

Of course, ideation involves more than the above-mentioned amino acids and neurohormones. As we know today, the inquisitive mode also involves other brain chemicals, such as Noradrenaline, GABA, ACTH, Acetylcholine, Oxytocin or Glutamate. According to Daniel J. Levitin, author of The Organized Mind, “Dopamine is no more important than Glutamate and GABA and any other chemicals.” Levitin states that we simply know more about Dopamine because it is easier to study.

Nutrition is crucial to enjoying a creative life

Anyhow, the reason why I picked Karl Lagerfeld as an example – apart from his sudden death – is that all traits, attitudes, and perfect circumstances won’t help if the body doesn’t support the mind. My theory is that nutrition is crucial to enjoying a long-lasting creative life.

If you would like to know more about how to foster your creative skills have a look at our:
Creative Skills Training Program