Is your creative mind on the job withered? 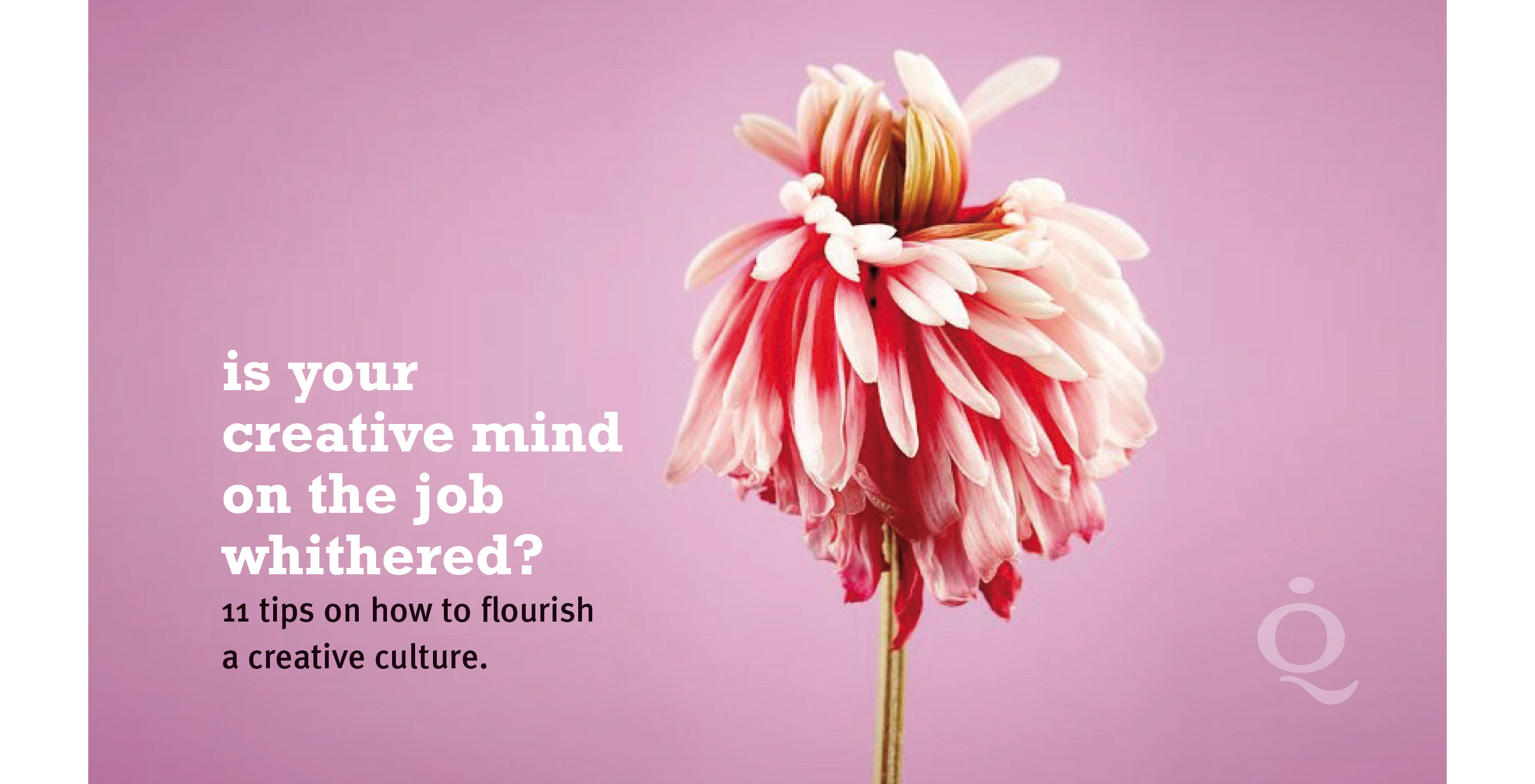 11 tips on how to nurture a creative culture.

Executives, HR managers, and creative directors like to ask themselves, “How do we find creative people?” But what if the very notion of the question isn’t right?

Many people who are hired specifically to be creative, find that they simply don’t have ideas while at work. Why is this? Some people think that mental blocks arise due to stress or time pressure.  Another commonly held belief is that people need the right physical surroundings to fuel their creative fires. But, what if the true key to thriving creativity is something else entirely?

The iQudo ideation survey 2015 findings show that the majority of the 502 people asked in San Francisco don’t have their best ideas at work. However, one in six said that they do, in fact, get their best ideas on the job. Surprisingly, for most of the 84 respondents, time plays a minor role; almost half of the “job inspired” cite “inspiring co-workers” as the number one reason for their on-the-job creativity. The second highest factor is “creative atmosphere” and then “creativity is required.” Time to ponder came in fourth place.

On-the-job creativity on the move

Before now, creativity on the job has been thought to depend on the individual, on having enough time to ponder, and to some extent on the corporate culture. However, the IQudo survey results show that the majority of respondents think of themselves as being creative, but still, most of them do not have their best ideas on the job. Therefore, the determining factor for on-the-job creativity seems to be the corporate culture. So, leaders are better off asking themselves: “How can we help our people to be creative on the job?“

11 tips on how to flourish a creative culture

Here are 11 guidelines – extending right from recruitment through the ideation process itself. By applying these tips, leaders can provide the context in which co-creation can take place and creativity can abound.

1. Bring like-minded people to the table. Surround yourself with people on your wavelength – folks you would like to go sailing with. These are people you are more likely to communicate with – which builds trust. Trust is a major element for supporting creativity because people are more likely to give honest feedback and come up with daring ideas.

2. Demand creativity. To accelerate creative thinking, get a genius on board. A genius places high standards on himself is passionate about his job, and inspires others to deliver creative excellence, too.

3. Allow time to unfocus. Under extreme time pressure, people are likely to focus too hard and hold on to a narrow point. In business, you need to stay extremely focused on your goal and bundle all your energy like a laser beam. For solving a tricky physical equation, deciphering an ancient language, or pondering about a new business idea, purely applying cognitive intelligence and reckless discipline won’t spark a flash of insight out of the dark. Ideas are faithless co-workers. They appear whenever they want. Unfocusing helps to widen the horizon. Ideas can flock in from all possible sources. For instance, informal talks with colleagues help people to see problems from a bird’s eye view, offer different perspectives, and open the horizon for unusual solutions.

4. Provide a diversity of perspectives. Diversity enables out-of-the-box thinking. No one person has all the expertise, so a blend of people from a range of specialist backgrounds is required to meet the product complexity demanded today. Also, cultural diversity is a key ingredient in groups where fresh thinking is in constant demand. The goal is a kaleidoscope of specializations and personality types transcending social and economic barriers. Think Noah’s Ark: the loading begins with the interview. Applicants who show black holes in their resume shouldn’t be sieved out like black sheep but treasured as black gold. Steve Jobs once said: “Part of what made the Macintosh great was that the people working on it were musicians, and poets, and artists, and zoologists, and historians who also happened to be the best computer scientists in the world.”

5. Provide a safe environment. If people feel safe, they are more likely to voice their unusual or wacky ideas. If there is job uncertainty or angst in the air, people play safe and keep their lips sealed on their unconventional ideas. Management can foster a sense of security by establishing a positive failure culture. If mistakes are permitted, people will feel safe enough to share their thoughts openly.

6. Give maximum freedom. Allow people to do whatever they need to do in order to be creative. A sense of freedom in their behavior is essential for people to have mental freedom creativity requires. One way to accelerate creative thinking is by running over writer’s block. According to the iQudo ideation survey 2015 almost 31% of all ideas are generated during exercising, like running, bicycling, and walking.

7. Crealogue. Maybe the fastest way to generate ideas is to crealogue [coined word from “creative” and “dialogue”]. “Crealogueing” is a process of volleying associations back and forth like playing ping pong. To lead a crealogue it is important to reveal your inner truth. Truth spoken out loud is surprising. A conversation becomes meaningful the moment someone puts their cards on the table. A poker player would never lay his/her cards on the table. One wrong move, one blink too many, and the money is gone. Poker is similar to business, sometimes it may be a good idea to hide your cards. But when it comes to having ideas, revealing the truth is like crossing the border into the unknown. Truth spoken out loud is like freshwater springing from deep within us. Because spring water is cold, it shocks us at first but then leaves a refreshing feeling on our skin. It leads us to new realizations about life.

8. Let people “coopete” for the best idea. Companies can raise the bar for creative solutions by having co-workers “coopete” (a coined word from “cooperate” and “compete”). Several small teams are more efficient in generating ideas compared to a large brainstorming group. Coopetition challenges and encourages ingenuity. Coopetition follows four human qualities: identifying with the same goal, comparing its own performance with the other, inspiring and helping each other to get better, and winning over each other. Coopeting for ideas works like this: first, the group agrees on the same goal/challenge/set of questions. Next, the group splits i 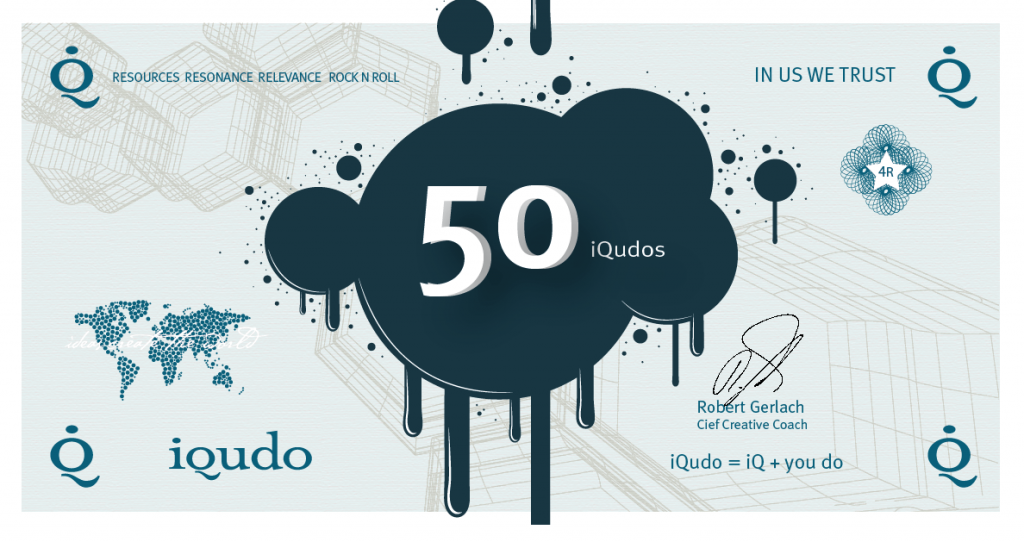 nto small teams and crealogues over a period of 90min. Then, each team picks their best two concepts and presents them to the overall group. Who picks the best ideas? Everyone! The most exciting way is to vote with money. Everyone gets 10 one-dollar bills and bets on the ideas he/she likes the most. In the IQudo training we use our own currency >> iQudos. (Sorry guys, but voting on your own ideas doesn’t count.)

9. Tolerate out-of-the-box behavior. If companies call for out-of-the-box thinking and fresh perspectives, they should expect and tolerate unusual behavior. Individuality is the key raw material for the alchemy of creativity. But visionaries are often eccentric personalities who can at times be childish, diva-like, or overly emotional. Therefore, they risk being misjudged and ridiculed by their colleagues. Artists are sensitive. If they are not taken seriously, they may back away and keep their ideas to themselves. Leaders have to learn to live with what may at times be beastly behavior if they want beautiful ideas. Just think of Mozart, who was not only known for his ingenious compositions but for his unorthodox behavior and vulgar language. Joseph Lange, Mozart’s brother-in-law said, “Mozart was never less recognizably a great man in his conversations and actions than he was busied with important work. At such time he not only spoke confusedly and disconnectedly but occasionally made jests of nature which one did not expect of him. Indeed, he even deliberately forgot himself in his behavior.” Some people need to act irrationally to end up with a masterpiece. Sing out loud, jump around, pop your teeth out, stretch your face, release the weight, be weird — who cares?! Be yourself and celebrate your silliness!

10. Appreciate ideas. A brilliant idea is a money-maker. It secures growth, wins clients, solves problems, makes lives easier. Unfortunately, ideas are intangibles goods. They can easily be taken away. Creatives, whose ideas have been robbed or downgraded into second-best solutions either fight for their rights, quit emotionally, or move on. If a brilliant idea is solving all the problems, but the one who had the idea is being left out, he or she naturally feels betrayed or frustrated. It’s like celebrating a win in sports and not inviting the striker who scored the goal and made the win possible. Without the creative, there would be no party, nothing to celebrate, no money in the cash register, no growth, no smiling faces. Therefore, the person (or group) who scores the idea should be appreciated and maintain control over the final outcome.

11. Have a common purpose. Do people have the chance to work on something unique, meaningful, and valuable? Or is the new project the same as always, just wrapped in different packaging? If people are driven by the same goal they will help each other to have great ideas, because they are going to share the rewards. Antoine de Saint-Exupéry’s famous quote applies to creativity on the job, too: “If you want to build a ship, don’t drum up the men to gather wood, divide the work, and give orders. Instead, teach them to yearn for the vast and endless sea.”

One thought on “Is your creative mind on the job withered?”